The Bangladesh Shipping Corporation (BSC), a state owned and managed public sector Corporation, is the largest ship owner in Bangladesh was established on 5th February 1972 under President’s Order No. 10 of 1972 with the objectives of providing efficient, safe, reliable and economic shipping services to the local exporters, importers and business houses, to develop sustainable shipping and ancillary infrastructures in a sovereign nation which just became independent on 16th December 1971 after a nine month long liberation war and thereby reducing dependence on foreign flag vessels to stop drainage of hard earned foreign exchange from the national exchequer.

The authorized capital of the Corporation is Taka 25 crores divided into 25 lac shares of Taka 100 each. As on 30.06.2005 the issued and paid up capital is Taka 20 Crores. Bangladesh Government is holding shares in the amount of Taka 17.50 crores i.e. 87.50% of the total shares and balance shares of Taka 2.50 crores equivalent to 12.50% are owned by various banks, financial institutions and other private shareholders. To accommodate Government approved equity and facilitate further issuance of BSC`s shares to collect capital for funding development projects, a proposal for raising authorized capital from Taka 25 crores to Taka 400 crores and paid-up capital from Taka 20 crores to Taka 350 crores has been approved by the Government. Accordingly a proposal for amending concerned sections and/or articles of President’s Order No. 10 of 1972 is under process. Bangladesh Shipping Corporation BSC Job Circular 2020 has been given below: 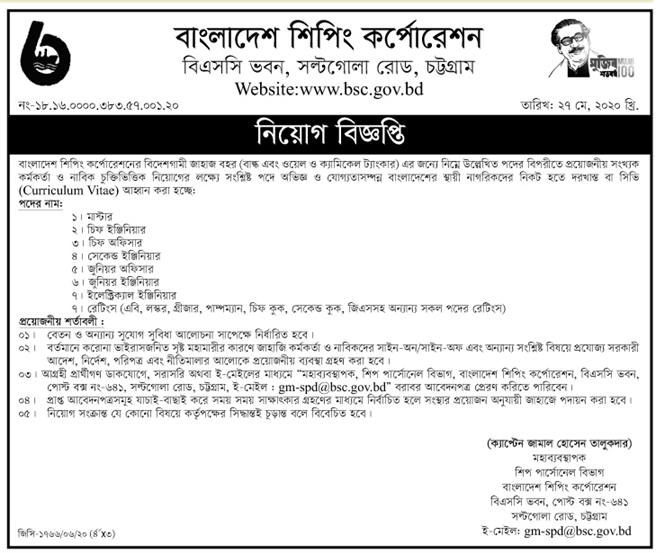 During the liberation war in 1971, all vessels of Pakistan`s National Shipping Corporation (NSC) were withdrawn to Pakistan. The newborn nation thus found itself without a maritime fleet of its own. Having been inspired by the supreme sacrifice made by the freedom fighters and martyrs for liberating the beloved motherland our people started their journey in 1972 without a ship merely capitalizing on their firm determination to do something for the newborn nation by dint of their sincere devotion and earnest efforts under the dynamic able leadership of the then management. In the early days BSC’s activities were confined to only in providing agency services to the foreign principals. However endeavours for acquiring ships were on concurrently. BSC was able to acquire two ocean going ships namely, “M.V. Banglar Doot” and “M.V. Banglar Sampad” in a very short period of time after establishment of the Corporation in 5th February 1972. Of them BSC acquired “M.V. Banglar Doot” of 12812 DWT on 10th June 1972 as it`s first ship. Due to relentless efforts for procuring vessels to build up a balanced fleet it was reached up to a peak of 27 vessels in 1982. BSC was able to acquire a total number of 38 ships till now. But upon expiry of commercial and economic life so far 25 vessels have been disposed off in different phases. At present BSC has a mixed fleet of 13 ocean going ships including two tankers engaged in carrying sea borne cargoes in different international sea routes. Average age of the ships in the fleet is 20 years and total capacity of all these ships is 1.96 Lac MT.

Powered by WordPress | Designed by TieLabs
© Copyright 2021, All Rights Reserved